Today, I’m hosting a guest post by Biship O’Connell, in which he discusses music, his new book, The Returned, and more!

Do you want proof that God has a sense of humor?

I’m a writer, and nothing drives me battier than the sound of typing on a keyboard. I can handle it for a little while, but after five minutes or so, it’s like nails on a chalkboard. Oh, and when I’m not writing (day job), I do a lot of developing and programming. Yeah, the irony is palpable. This, combined with the fact I’m very visual in my writing—I “see” the stories like a movie playing in my head, and transcribe what I see—is why music is so important to me when I write. What’s a good movie without a killer soundtrack? It’s a bonus that it also drowns out the maddening sound of striking keys. Argh, even thinking about it puts my teeth on edge!

For every book I’ve written, I’ve made multiple playlists. They typically surround characters, or specific scenes. Sometimes, when I’m working on a particularly powerful scene, I’ll put a single song on a loop and listen to it continually till I’m done. Music is so important to me that all my characters have favorite musicians and songs. Listening to those artists fuels me emotionally and also helps me get into my characters’ heads. Edward is a Tom Waits fan, followed closely by Diana Krall, Leonard Cohen, and Dave Brubeck. For Caitlin it’s Gaelic Storm, The Elders, Sarah McLachlan, and The Cowboy Junkies. Brendan leans towards The Pogues, The Wolfe Tones, and, despite his anachronistic tendencies, Dropkick Murphy, Flogging Molly, and Flatfoot 56. Dante is more eclectic as a result of his age, and his tastes range from Vivaldi (he’s a sucker for a solid cello concerto) to Daft Punk and The Crystal Method.

Wraith was a bit more complicated. As I worked on The Forgotten, the music was more about the story. The songs were dark and brooding. “Ain’t no Grave,” by Johnny Cash saw quite a lot of play, and if you’ve read The Forgotten, you’ll understand why. It made sense I wasn’t focused on music for Wraith as a character. After all, she was a homeless kid struggling to keep sane from one day to the next. She didn’t have a lot of time to listen to music. That changed when I started writing Three Promises. Wraith came to life in a way I never imagined, or dared to hope. Her story opens in the aftermath of The Forgotten. I knew she’d be battling severe depression and trying to find a sense of purpose. As someone who struggled with that as a teenager, and still do at times, I know personally how much music can help. I wanted Wraith to have the same experience, to find refuge, and possibly hope, in music. But what songs? What artists? When I found not just the artist, but the song, it was so perfect, that I knew I had to include some of the lyrics in the story itself. The song was “Wonder (Wonder Woman Song)” by The Doubleclicks.

I was introduced to The Doubleclicks through John Scalzi’s blog when he posted the video to “Nothing to Prove.” It’s perhaps their most famous song; an anthem for geek girls. The song is great, and the video is not just powerful, it’s empowering. Fans of Angela and Aubrey, the sisters who make up The Doubleclicks, know that most of their songs are all kinds of nerdy fun. They sing about cats, board games, dinosaurs, burritos, lasers… well, you get the idea. But some of their songs are more personal, and are deeply moving. Their song “Bad Memories” really resonated with me and their cover of “In the Middle” is fantastic. I thought about using “Nothing to Prove” to give Wraith hope, but it just didn’t seem right for her. Then I heard “Wonder (Wonder Woman Song)” and I knew that was Wraith’s song. How does a song about a super-powered Amazon inspire a homeless girl fighting depression? You’ll have to read the story, and I suggest listening to the song as well. Not because you’ll need to know it, just because it’s an awesome song.

For The Returned, I wanted something that fit the broad mix of amazing music New Orleans—the setting for the book—had to offer. I chose songs you might hear street musicians playing on the corners of cities anywhere; songs filled with power and emotion. Wraith however is still a diehard Doubleclicks fan. So when a particularly important scene came up, I knew where to turn. This time it was the song “Godzilla.” The song is sad, but tinged with humor, and fit who Wraith was becoming perfectly. For both The Returned and Three Promises, The Doubleclicks were good enough to let me license the lyrics, and I was thrilled to be able to (legally) include them in the stories.

I’m sure I’m not alone in my love of music. Like any art form, it’s emotionally evocative. Most people know the shameless joy of singing to a favorite song at the top of their lungs while driving, not caring who sees you. We find solace and comfort in songs when we have a broken heart. We celebrate with music and dancing; though if you’re like me, it can only loosely be called dancing. We find comfort in our sad times with the perfect track. Songs mark the passing of the years like signposts. And sometimes, just sometimes, you hear a song and it reaches into your soul from the very first time you hear it. For me, those songs tend to be the bittersweet ones; sad, but filled with hope, and the promise of tomorrow, a new day where anything is possible. What can I say, I’m a romantic. The emotion, the magic, the power of music fuels me, both in my life and in my creative endeavors. Music, books, every kind of art, it all serves to connect us. When the artist creates, that creation is imbued with some of their soul, an emotional snapshot of them at that moment in time. The stories in my books are my snapshots and The Returned feels like my best work yet. I hope you read it, and that you enjoy it, maybe connect with it or the characters within. If you’d like, I’d be happy to suggest some music to set the mood before you start reading.

Now stare at the cover before reading this awesome blurb for The Returned. Go ahead. I’ll wait. 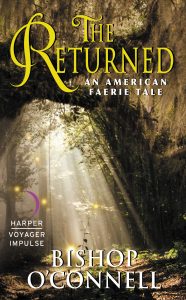 Almost a year after their wedding, and two since their daughter Fiona was rescued from a kidnapping by dark faeries, life has finally settled down for Caitlin and Edward. They maintain a facade of normalcy, but a family being watched over by the fae’s Rogue Court is far from ordinary. Still, it seems the perfect time to go on their long-awaited honeymoon, so they head to New Orleans.
Little do they know, New Orleans is at the center of a territory their Rogue Court guardians hold no sway in, so the Court sends in Wraith, a teenage spell slinger, to watch over them. It’s not long before they discover an otherworldly force is overtaking the city, raising the dead, and they’re drawn into a web of dark magic. At the same time, a secret government agency tasked with protecting the mortal world against the supernatural begins their own investigation of the case. But the culprit may not be the villain everyone expects. Can Wraith, Caitlin, and Edward stop whoever is bringing the vengeful dead back to life before another massacre, and before an innocent is punished for crimes beyond her control?

Want to know more about Bishop? 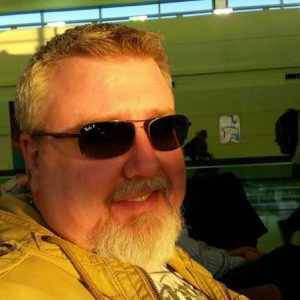 Bishop O’Connell is the author of the American Faerie Tale series, a consultant, writer, blogger, and lover of kilts and beer, as well as a member of the Science Fiction & Fantasy Writers of America. Born in Naples Italy while his father was stationed in Sardinia, Bishop grew up in San Diego, CA where he fell in love with the ocean and fish tacos. After wandering the country for work and school (absolutely not because he was in hiding from mind controlling bunnies), he settled Richmond VA, where he writes, collects swords, revels in his immortality as a critically acclaimed “visionary” of the urban fantasy genre, and is regularly chastised for making up things for his bio. He can also be found online at A Quiet Pint (aquietpint.com), where he muses philosophical on life, the universe, and everything, as well as various aspects of writing and the road to getting published.