The Cover for Armageddon Rules is here!

I can finally share the cover for Armageddon Rules, Grimm Agency #2 with you! Without further delay, here it is (Click for bigger)… 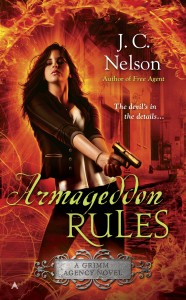 I love the colors in this, and it lines up well with the rest of the series, but what’s a cover reveal without a blurb?

Marissa Locks, newly appointed partner of the Grimm Agency, has a reputation for making a mess of magical matters—although causing Armageddon is a new low, even for her…

Marissa is due for a little happily ever after. After all, she did kill the evil Fairy Godmother, end a war, and snag a sweet promotion within the Fairy Godfather’s magical-problem-solving Agency. But between maintaining a relationship with someone whose amorous advances can cause third-degree burns, dealing with a killer-poodle infestation, and helping her best friend, Princess Ari, learn to wield spells more powerful than curing a hangover, she’s not getting as much peace and quiet as she hoped.

When an enemy from her past appears to exact a terrible revenge, Marissa’s life goes from hectic to hell on earth. With Grimm inexplicably gone and Ari trapped by a sleeping spell, Marissa decides to fight fire with hellfire—and accidentally begins a countdown to the apocalypse.
With the end of days extremely nigh, Marissa will have to master royal politics, demonic law, and biblical plagues in a hurry—because even the end of the world can’t keep the Agency from opening for business…

THAT, folks, is Armageddon Rules. Coming next year!

You can add Armageddon Rules to your GoodReads shelf here:

Or preorder it on the bookstore of your choice:

And if you missed the first books in the Grimm Agency series, Free Agent, have no worries! Check out these links:

So now you know what’s coming your way. I hope you enjoy it.