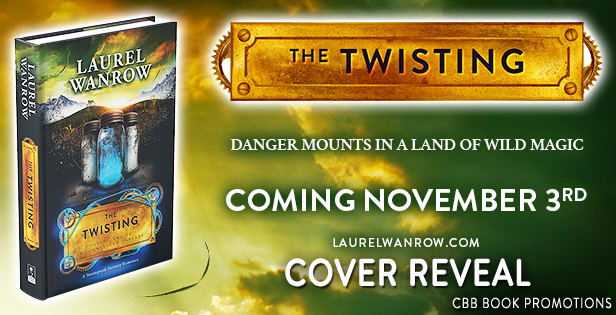 I’m happy to count Laurel as one of my friends, and today we’re revealing the cover of her newest book…The Twisting (in case you couldn’t tell from the title). It’s sort of a steam-punk shape shifting romance, in the same vein as the Parasol Protectorate books. Anyway, on to the cover!

Welcome to the cover reveal for The Twisting, Volume Two of The Luminated Threads by Laurel Wanrow! The talented Craig Shields www.craigshields.co.uk has beautifully depicted the magical Victorian world of this new adult steampunk fantasy romance. His cover artwork graces both the ebook and a print paperback edition.
Pre-orderThe Twisting on Amazon for the special price of only .99 cents. The Twisting releases November 3, 2015 in ebook and trade paperback. 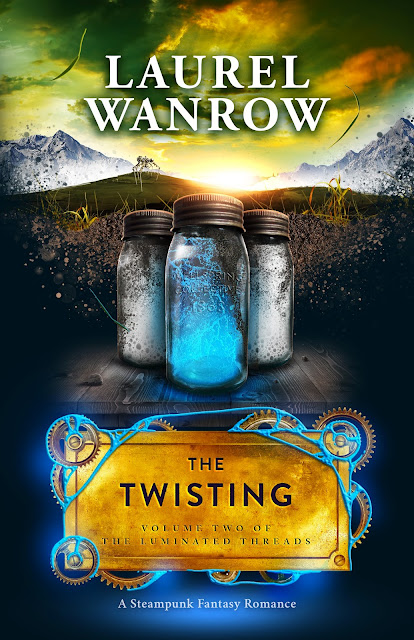 About the Book:
The story of otherworldly Blighted Basin continues in THE TWISTING…

In a valley hidden from the rest of Victorian England, Annmar Masterson has found friendship and acceptance at Wellspring farm. But as her recently discovered magical abilities grow, unstoppable crop-eating pests drive her new home to the brink of collapse.

Desperation drives landowners to utilize prototype machines, heedless of the threat to their way of life. As the danger mounts, Annmar’s knowledge of Outside ways—and her magic—might be more important than anyone realizes.


Weaving steampunk engines and a land of wild magic with a coming-of-age romance, this sequel to THE UNRAVELING and second volume in THE LUMINATED THREADS whisks readers off on another spellbinding adventure.

THE TWISTING is a full-length novel, approximately 370 pages, with a sweet romance for readers 18+ due to mature themes. Please note: This is volume 2 of a three-part serialized novel. Volume 1, The UNRAVELING is available now, and Volume 3 releases in the spring of 2016 to complete Annmar and Daeryn’s steampunk fantasy romance. To be notified of upcoming releases, sign up for Laurel’s Newsletter. (http://eepurl.com/17xRH)

Preorder The Twisting on Amazon for only .99 cents!
Goodreads
—————-

Annmar scrunched back into her pillow. This wasn’t a cat. The face was too pointed, never mind the sleek body three times as long as it was tall. Yet when she looked into its face, the familiar eyes belonged to…

Eyes squinting, the animal’s ears pressed flat. Its head sank, giving a little jerk up and down.

Had he…nodded? “That is you.” Daeryn. This was a polecat. Her drawings had been correct, but not the same as seeing one uninjured, acting normal. Or as normal as a polecat in someone’s bed would act.

She pressed her fingertips to her temples. Oh, Lord, just stop thinking already. But her head didn’t hurt, her vision wasn’t cloudy, and neither were her thoughts. She lowered her hands and looked around to confirm they were alone before fixing her gaze on…him. “What are you doing in my room?”

That was a shrug. He half-crouched and jumped to the foot of the bed, then to the floor, all before she knew that’s what he had in mind. He disappeared behind the end of her bedstead.

She half-sat up, and as she started swinging her legs around, a hand pulled down the extra quilt that hung on the end of her bed. Annmar gasped and scooted under her covers. A moment later, Daeryn’s tousled brown hair came into view. The quilt swung through the air, and he stood, the fabric draped over his shoulders and held closed in the front.

He squinted at her, his expression the same as the polecat’s, looking very sleepy. “Sorry,” he muttered. “Didn’t mean to surprise you.”

What was she supposed to say to that? He’d been in her room. Sleeping in her room. In her bed! Oh, Lord, what would Mother… Nothing. Mother wasn’t around to worry about anymore, as Mary Clare had pointed out. Annmar had no one to answer to, Blighted Basin society included. Their lack of rules completely befuddled her. How did these people function?

Still. This was highly improper. She glared at him, and he seemed to shrink beneath the quilt, drawing it closer to his body. He was likely naked.

She heated, the blush running from her chest up over her face and…down. Thinking of it just brought on more heat. Mercy, in her bed. Had he been…

His eyes widened, and he shook his head vehemently. “Only as a polecat.” He took a step back. “I wouldn’t do that… Not to you.” He turned and walked to the door. “I’ll leave.”

Yes, he most certainly was naked under there, and a part of her was curious. She was nineteen, a grown woman. Her first look at him had been brief—she swallowed—but good. “Hold on a minute,” she gasped.

He paused in the open doorway and half-turned to face her.

“I don’t understand what you’re doing in my room.”

His brows and shoulders lifted at the same time. He looked as confused as she felt when he stepped out and closed the door.

Laurel Wanrow loves misty mornings, the smell of freshly dug earth, petting long-haired guinea pigs and staring at the stars. She sees magic in nature and loves to photograph it.

Before kids, she studied and worked as a naturalist—someone who leads wildflower and other nature walks. During a stint of homeschooling, she turned her writing skills to fiction to share her love of the land, magical characters and fantastical settings.


Visit her online at www.laurelwanrow.com.

Don’t miss Volume One, in The Luminated Threads series, The Unraveling:

A signed paperback copy of The Unraveling, Volume One of The Luminated Threads is on a Goodreads Giveaway Thursday, Oct 22 through Thursday, Oct 29, 2015.

GIVEAWAY:
$10 Amazon card, and 2 print paperbacks—the winners’ choice of The Unraveling (book 1) or The Twisting (book 2)
Open to the US/CA/UK
Ends November 2, 2015
Prizing is provided by the author, hosts are not responsible.

This event was organized by CBB Book Promotions.