Cover Reveal for The Day Before

Today, I’m delighted to get to show off the cover for Liana Brook’s SF Thriller, The Day Before. Read on for the blurb and more! 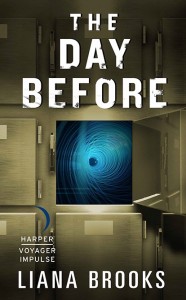 This is a great story – I was privileged to read it before it made its way out into the world, and it has all the elements you’d want in a SF/Thriller story – check out the blurb:

A body is found in the Alabama wilderness. The question is:

Is it a human corpse … or is it just a piece of discarded property?

Agent Samantha Rose has been exiled to a backwater assignment for the Commonwealth Bureau of Investigation, a death knell for her career. But then Sam catches a break—a murder—that could give her the boost she needs to get her life back on track. There’s a snag, though: the body is a clone, and technically that means it’s not a homicide. And yet, something about the body raises questions, not only for her, but for coroner Linsey Mackenzie.

This case might be the way out for her, but that way could be in a bodybag.

A thrilling new mystery from Liana Brooks, The Day Before will have you looking over your shoulder and questioning what it means to be human.

You can view The Day Before at GoodReads and find the links to preorder from the publisher of your choice!

Liana Brooks once read the book GOOD OMENS by Neil Gaiman and Terry Pratchett and noted that both their biographies invited readers to send money (or banana daiquiris). That seems to have worked well for them. Liana prefers strawberry daiquiris (virgin!) and will never say no to large amounts of cash in unmarked bills.

Her books are sweet and humorous with just enough edge to keep you reading past your bedtime.

Liana was born in San Diego after bouncing around the country she’s settled (temporarily) in the great wilderness of Alaska. She can be found on Twitter (@LianaBrooks), on FaceBook, and on the web at www.lianabrooks.com.