Today, I’m delighted to host a friend, Laurel Wanrow, and celebrate the release of her Sci-Fi Romance, Passages.  Check out the cover, read about what makes her world different, and read an excerpt of this excellent book! 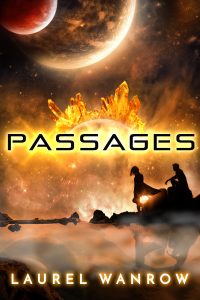 I am a big fan of Neil Gaiman. I love his book Stardust, and the movie as well. I was delighted to discover its extras included a behind-the-scenes interview with Neilhimself. He talks about how he came up with the idea for the story: He’d been playing with using a wall, on which one side the world was mundane and the other magic. On a drive one night, he saw a shooting star and wondered what would become of the star if it landed on the other side of the wall. Stardust was born. 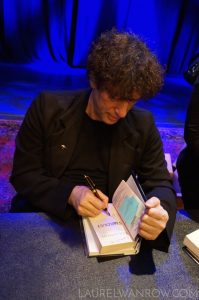 Fantasy authors take normal ideas and twist them onto their sides. I have a concept I’ve done that with in Passages—lacuna.

Lacuna is a real thing—it’s a gap or an unfilled space. The word is most widely used for bones, but it can be a gap in anything. By letting my hero Quinn be able to use lacuna, Passages becomes a science fantasy—a world where both science and magic work. In fact, J. C., my gracious host for this post and one of my fabulous critique partners, first pointed out to me that I had combined the two.

Readers have their preferences and so do writers—I can’t imagine a story without some magical aspect. Perhaps Maya Angelou says it best:

“If you are always trying to be normal you will never know how amazing you can be.”

Excerpt from Quinn’s point of view:

“Keep going. Do the cross-leap,” she gasped, “even if I black out.”

Hell. What else could I do? With the guard cursing behind us, I flung an arm around her shoulder and trotted along the corridor. We dissolved.

Fully immersed in the accelerator’s energy, I could make connections to any destination once I visualized it…but my mind jumbled. No image came. Do the cross-leap. I mind-linked with Graen. Her trips appeared and I snatched the vision of the island. West of here at fifteen degrees longitude. North, sixty degrees latitude. No direct course between this Conducer and another, but that made it harder to trace. I merged two segments…shortened another, and in a split second my mind cranked out the jumps. Our molecules flew apart.

We hurtled through space on a trajectory manipulated from a map’s coordinates, and I held to the transference as if our lives depended on it—because, judging from the Blackguard’s shouts, they did.

The tingling in my body ebbed. I collapsed with Graen into the leaves at the edge of a wood. Frigid air surrounded us under a sky speckled with starlight. Aarde’s golden moon, Roamer, hung on the horizon, about to set. Behind a rocky outcrop on the adjacent hilltop, the faint glow of pink meant Misha, the red moon, was rising. It was at least an hour before the dawn we’d left behind on the mainland.

Graen hadn’t moved, but neither had I. I tightened my arm around her and applied pressure to her bleeding neck. Her steady breathing comforted me as I listened to the stillness. Had the ’torg guard followed? We’d never had witnesses to what I could do before. According to Graen, our people’s way of rearranging particles for movement—into the near space gaps of Lacuna, or far space travel like cross-leaping—marked us as aliens on this well-secured planet.

And Aarde banned outsiders. If the Docga’s ’torg minions discovered us, it’d land us beds in jail until we could be deported to an off-planet detention center.

“Find someone you can trust.”

For decades, Eve and her fellow electorgs—part human, part machine—have worked on the quiet planet of Aarde, beating back toxic spores that threaten to poison the native people. When the new commander halts work right before a deadly spore release, Eve frantically plots to protect the villagers she considers friends and family.

On the run after an ambush, Quinn holds a secret that nearly got him killed. If only he knew what it was. Though the attack scrambled his memories, Quinn is sure of one thing—he can’t trust the electorgs. But they know information he desperately needs to puzzle out who wants him dead, and why.

With the fate of life on Aarde in the balance, the logic of joining forces with Eve overrides Quinn’s fears…and erupts into an attraction that could prove fatal for both of them.

Because the planet’s commander might just be Quinn himself.

Passages is on preorder & sale for .99 through February 5th.

Add Passages to your Goodreads shelf! 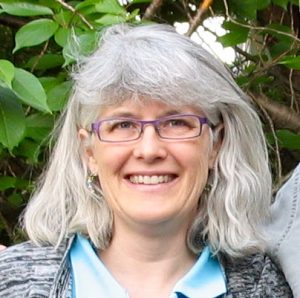 Before kids, Laurel Wanrow studied and worked as a naturalist—someone who leads wildflower walks and answers calls about the snake that wandered into your garage. During a stint of homeschooling, she turned her writing skills to fiction to share her love of the land, magical characters and fantastical settings.

Below are the bloggers participating in the Blog Tour for Passages. Each stop will have excerpts and tidbits about the science & fantasy, and a chance to win the tour prizes: a $10 Amazon eGC or a sign paperback of Passages. (Giveaway open to US/CAN)

Jan 26: Travel to a Mineral Hot Springs on Vicki Batman’s Handbags, Books, Whatever…

Jan 27: Goudrogen Crystals on Jessica E. Subject’s Happily Ever Afters Across the Universe

Jan 29-31: Thermophiles on The Multiverses of Liza O’Connor

Jan 30: Moons and Rising Waters with Laurie A. Green on Spacefreighters Lounge

Jan 31: What kind of a book is it? With Kira Decker on Toni Decker Books

Jan 31: Lacuna, a Bit of Realism, a Bit of Magic on Author J. C. Nelson’s Urban Fantasy and More

Feb 1: Resolving your story problems…including knocking out a pesky spore? on Riley Moreland’s Whiskey With My Book

Feb 3: What do you think of when I say “cyborg”? on Veronica Scott’s Science Fiction & Fantasy Blog

Feb 4: The Mystery of Transporters on Heather Massey’s The Galaxy Express