I’ve always been a fan of the reprap project. I’ve tried to build one at various stages, and had to face the fact time and again that I’m lousy at building electronics from scratch. However, in the last few years, 3d printers have not only become simpler, they’ve become near commodity items, with kits as low as $150 on different sites.

A few months ago I won a drawing at work for a gift card, and decided to splurge on something I would never buy otherwise: A 3d printer.

For my first one, I selected (based on price) the Monoprice Mini Select.

Amazon had it as an open box special.

Now, to go ahead and spoil things, the mini is fantastic little printer for PLA (the softer plastic which melts at 185 degrees celsius, and frankly will deform if you leave it in a hot car). PLA is the starter plastic everyone should print with, because right now, printing is as much art as it is science, and if you buy a printer, you need to be comfortable adjusting, cleaning, and maintaining it.

In a few years we’ll laugh and say “remember when you had to do X to your printer?”

That is not right now.

Also, to note, you can get the V1 and the V2 of the mini. I’ve owned both. There is no viable reason to get a V2 if the V1 is significantly cheaper, since all the upgrades the V2 has (cooling fan, standard hot-end) can be done yourself with some time.

The downside of the mini? Print area. Print area is 120mm, which is both huge compare to how the photos make it look and tiny compared to other printers. The mini has a huge community developing mods for it, and it’s pretty much exactly what a new-to-3d-printing person would want.

Now, when I bought the mini I actually considered buying an Anet A8

The A8 is a cheap Chinese clone of a Reprap Prusa V2. Why would I do this?

So…for my birthday, I splurged and spent $150 on a kit that took weeks to arrive from China. The A in “A8” stands for “All Assembly.” To assemble more, I’d need to fly to China and help manufacture it.

It took ~6 hours to build from a kit (they say 10, and I don’t doubt it for some builds). It takes even longer to calibrate. This is NOT a “working straight out of the box” machine. This is more like a kit you can assemble to build something you then use to make a good 3d printer.

Incidentally, the thing the A8 needs the most (an E3d hotend) you cannot print, but you can order it for $10 bucks from China. I suggest ordering several, along with replacement belts.

Thus far, the A8 is exactly what I expected – a kit I tinker with off and on and modify, which, in the next couple weeks, will blossom into a real workhorse printer with a build area 220x220x240mm. The biggest problem I see with it is that wiring in mosfets to control the heater and extruder are, in my opinion, absolutely required for safety, so the $153 printer is at least $173.

And what do I print? All sorts of things. Prototypes for a nutrient control system I’m designing. Pump pieces for the same.

Lots of toys, which I print and then paint. 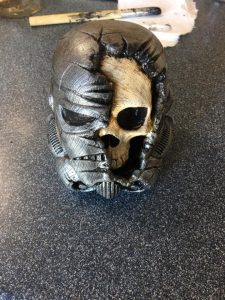 So…if you are interested in 3d printing, the mini is a fantastic starter printer. The V1 is rock solid, the V2 is good (but is louder). The Anet (and similar Tronxy or unbranded clones) are good machines, but you really need another 3d printer to build the parts to upgrade them.

I also played with/owned for a day a Micro3D printer (the mini). I can’t recommend that printer to anyone. It’s more expensive than the mini and the print quality is poorer, the hardware feels like it came from a happy meal, and the software blows chunks. I printed a few things on a davinci Jr, and other than the filament lockin, it was a decent machine.

Own a printer? Share me links to your favorite items you’ve made.

Thinking about it? Tell me what kind!